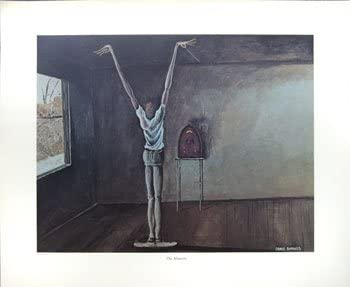 Ernest “Ernie” Eugene Barnes, Jr. (July 15, 1938 – April 27, 2009) was an African-American painter, well known for his unique style of elongation and movement. He was also a professional football player, actor and author.

Ernie Barnes’ involvement with art began at an early age, like most gifted adult artists. However, when he reached high school his creative endeavors were temporarily detoured in his determination to become a successful athlete. In part this was a response to the demands of peer pressure which can be so strong at that age. He graduated from his high school a hero and star football player, and with 26 full athletic scholarships to choose from. He chose North Carolina Central University and a major in art. After college he continued in an illustrious professional athletic career, but never let his love for football overshadow his love for art. Football gave him an enormous satisfaction of achievement, of being able to do something extremely difficult, and do it well. Art, however, allowed him the privilege to interpret for the public his concepts of the relationship between art and life.

In 1966 Ernie Barnes retired from football to commit himself to his art. His athletic career made a special contribution to his sensibility and his art, and he often weds physical with artistic expression. Many of his subjects are satirical and he uses exaggeration, and even caricature, to enhance their mood, humor and physical vitality. Seen through Barnes’ dramatic-comic vision, human figures play out their roles in a contemporary scenario in a manner that is both entertaining and finely executed. It can easily be said that Barnes has more than established himself as one among America’s leading contemporary painters.

Barnes credits his college art instructor Ed Wilson for laying the foundation for his development as an artist. Wilson was a sculptor who instructed Barnes to paint from his own life experiences. “He made me conscious of the fact that the artist who is useful to America is one who studies his own life and records it through the medium of art, manners and customs of his own experiences.”
All his life, Barnes was ambivalent about his football experience. In interviews and in personal appearances, Barnes said he hated the violence and the physical torment of the sport. However, his years as an athlete gave him unique, in-depth observations. “(Wilson) told me to pay attention to what my body felt like in movement. Within that elongation, there’s a feeling. And attitude and expression. I hate to think had I not played sports what my work would look like.”
Barnes’ first painting sale was in 1959 for $90 to Boston Celtic Sam Jones for a painting called Slow Dance. It was subsequently lost in a fire at Jones’ home.
Critics have defined Barnes’ work as neo-mannerist. Based on his signature use of serpentine lines, elongation of the human figure, clarity of line, unusual spatial relationships, painted frames, and distinctive color palettes, art critic Frank Getlein credited Barnes as the founder of the neo-Mannerism movement – because of the similarity of technique and composition prevalent during the 16th century, as practiced by such masters as Michelangelo and Raphael.

Numerous artists have been influenced by Barnes’ art and unique style. Accordingly, several copyright infringement lawsuits have been settled and are currently pending.

Barnes created the painting Sugar Shack in the early 1970s. It gained international exposure when it was used on the Good Times television series and on a 1976 Marvin Gaye album.

In 1984 Barnes was appointed the Official Sports Artist for the Games of the XXIII Olympiad. Los Angeles Olympic Organizing Committee President Peter V. Ueberroth said Barnes “captured the essence of the Olympics” and “portray the city’s ethnic diversity, the power and emotion of sports competition, the singleness of purpose and hopes that go into the making of athletes the world over.” Barnes was commissioned to create five Olympic-themed paintings and serve as an official Olympic spokesman to encourage inner city youth.

In 1985 Barnes was named the first Sports Artist of the Year by the United States Sports Academy.

To commemorate their 50th anniversary in 1996, the National Basketball Association commissioned Barnes to create a painting with the theme, “Where we were, where we are, and where we are going.” The painting, The Dream Unfolds hangs in the Naismith Memorial Basketball Hall of Fame in Springfield, Massachusetts. A limited edition of lithographs were made, with the first 50 prints going to each of the NBA’s 50th Anniversary All-Time Team.

In 2004 Barnes was named America’s Best Painter of Sports by the American Sport Art Museum & Archives.