One year after she appeared in the Whitney Biennial, two pieces by artist Christine Sun Kim are joining the collection of the Smithsonian American Art Museum in Washington, D.C., marking the institution’s first acquisition of a sound installation. The news was announced Wednesday in an Instagram post by Los Angeles’s François Ghebaly gallery, which represents Kim. The acquired works by Kim, One Week of Lullabies for Roux (2018) and Close Readings (2015), will debut in an exhibition on art and musical thinking planned for 2022.

“Together, these pieces offer a wonderful introduction to Kim’s complex, multimedia practice and her incisive exploration of the social life of sound,” Saisha Grayson, curator of time-based media at SAAM, told ARTnews. “Kim’s pointed, playful, personal interventions encourage us all to bring renewed attention and care to our individual and collective relationships to sound, and how we communicate and connect with each other.” 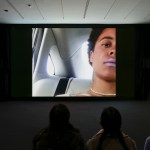 In One Week of Lullabies for Roux, Kim invited seven friends to create sound files, or “sound diets,” intended to soothe the artist’s daughter. The lullabies were based on a conceptual score she developed, which instructed that the songs not contain lyrics or speech and that an emphasis be placed on lower frequencies. The participants were given no time constraints, and the finished files ranged in duration from about a minute and 30 seconds to 11 minutes. The installation consists of seven channels which play each entry.

For Close Readings, Kim interrogated how, for the deaf or hard of hearing, the experience of watching a movie is shaped by captioning—specifically, what sounds the captioner chooses to omit or articulate. Kim compiled a selection of film clips in which sound plays an important role and asked four hearing impaired collaborators to supplement captions to the existing subtitles. The new videos play over four synchronized flatscreen monitors, bearing captions which range from conceptual to critical to humorous (a scene from Stanley Kubrick’s 2001: A Space Odyssey is titled with the caption “overly pretentious piano music that evokes absolutely nothing”).

“Being part of the Smithsonian American Art Museum collection makes it feel like my work is recognized as part of American history, especially as their first sound acquisition,” Kim told ARTnews, adding, “I think it’s right at home in Washington, D.C. because the museum is located very close to Gallaudet, the only Deaf university in the world.”