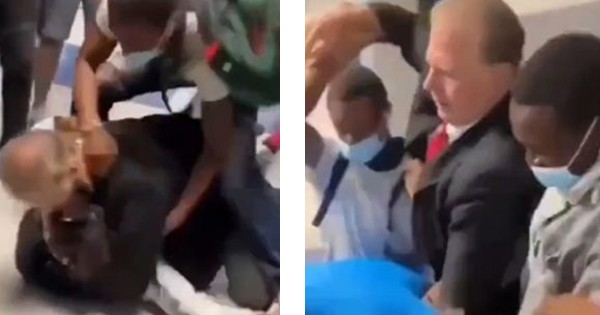 Nationwide — William Bennett, a science teacher from Louisville, Kentucky, has been fired months after he was caught on video attacking Jamir Strane, a 16-year old Black student. In the video, he is seen pinning him to the ground and saying that he was “just another black boy who got shot.”

Bennett was terminated from his job at Marion C. Moore High School in Louisville last month. The termination letter stated an investigation found he “escalated the situation” and made “inappropriate comments” about a student, according to The Insider.
The termination letter stated that the altercation, which happened in August 2021, apparently started when Bennett told Strane he was “going to end up in the streets dead” which provoked the student to punch the teacher. The teacher then fought back and put his “whole body weight on top of him.”
An unnamed student quoted in the report stated he overheard Bennett tell Strane he was “just another Black boy that got shot.” Bennett admitted to saying that as well.
Strane, who had been shot in a drive-by shooting in 2020, “suffers ongoing emotional trauma” and was apparently triggered by Bennett’s comments, according to a report from Child Protective Services.
Moreover, a video of the incident went viral on social media but has since been deleted. It showed Bennett and Strane fighting while other students can be heard yelling to stop Bennett.
A witness reportedly managed to pull them away from each other but Bennett still followed Strane to continue attacking and kicking him, the letter stated.
Meanwhile, Strane was suspended for 10 days and faced an assault charge over the incident. His mother, Erica Strane, filed a lawsuit against the teacher as well as Jefferson County Public Schools.