Phillips has announced it will sell a rare Clyfford Still painting that go up for auction during the house’s modern and contemporary art evening sale on December 7 in New York, where it will hit the block alongside a $35 million David Hockney landscape. Still’s large-scale crimson and black abstract canvas PH-407 (1964) is expected to achieve a price of $17 million.

The seller, a private West Coast collector, purchased the work from Mitchell-Innes Nash in New York. Prior to that it resided at the namesake museum of German art collector and publishing heir Frieder Burda, where it was exhibited extensively, most recently in the museum’s “Gerhard Richter. Birkenau (& Grosse Abstraktion)” showcase in 2016. 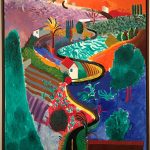 Describing the work’s tonal qualities, shifts between red and black, and Still’s signature layering technique, Phillips said in a statement, “This dynamism—lent to the work not by one form but by the relationship between multiple forms—is characteristic of Still’s mature canvases, which coalesce kinetic energy with a reductive approach.” The present work, measuring at 114 inches by 75 inches, was painted in 1964 three years after the Abstract Expressionist’s initial retreat from New York to rural Maryland, where he spent 20 years before his death.

“Only 30 to 40 [paintings by Still] are estimated to remain in private hands, with the vast majority held in the Clyfford Still Museum and other institutional collections around the globe,” said Miety Heiden, Phillips deputy chairwoman and head of private sales. “His Maryland works, such as PH-407, are especially rare as he only allowed one gallery show in the last two decades of his career, refusing to part with these works and only selling on the fewest of occasions.” The sale is timed with the recent opening of an exhibition devoted to Still’s mature period at the Denver museum this fall.

Between 1961 and 1980, Still executed more than 375 paintings and 1,100 works on paper, according to the museum’s website. In 1969, PH-407 was one of the some 35 works the artist sold to Marlborough-Gerson Gallery. Others from the sale grouping reside at the Clyfford Still Museum, at the San Francisco Museum of Modern Art and the Hirshhorn Museum & Sculpture Garden, Washington, D.C.