Last month, a prized David Hockney portrait from the holdings of the financially strapped London Royal Opera House brought in £12.8 million ($16.9 million) when it sold at Christie’s. Some mourned the fact that the work would now disappear from public view, but it now seems those concerns were misplaced.

A new Art Newspaper report reveals that the buyer of Hockney’s Portrait of Sir David Webster (1971) is David Ross, the cofounder of Carphone Warehouse—and the chair of the Royal Opera House’s board of trustees. According to the report, he will return the work to the opera house once the purchase is finalized. He also has plans to loan it to the reopening exhibition of London’s National Portrait Gallery, where Ross is a trustee, in 2023. 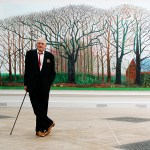 At the Christie’s London contemporary auction, which generated $65 million total, there were only two bidders competing for the work: its third-party guarantor, a private collector abroad, and Ross, who won the painting at a bid of £11 million ($14.4 million) at the low estimate, and £12.8 million with buyer’s fees ($16.9 million), in the process keeping it from leaving the U.K. The expensive save marks the sixth-highest price paid for a Hockney at auction.

Facing serious financial strain several months into the pandemic, the opera house announced the sale of the Hockney as part of a four-part recovery plan to sustain its operations. That plan also includes fundraising efforts, staff restructuring, cost reductions, and government aid. Prior to the sale, Alex Beard, chief executive of the Royal Opera House, said in a statement that the arts space was facing “the biggest crisis in our history.”

The work, a portrait of the former general administrator of the Royal Opera House, was commissioned to mark Webster’s retirement in 1971, will now go back to its original venue on long-term loan.

Ross, who was appointed chair of the opera house’s board of trustees in July, has gained a reputation as one of Britain’s most active philanthropists, and is known for having amassed a valuable collection of late 20th century and contemporary British including works by Hockney, Patrick Caulfield, Richard Hamilton, Peter Blake, and Bridget Riley.

“The arts have had an incredibly difficult year, with many institutions having to make extremely tough decisions in order to survive,” Ross told the Art Newspaper. “As the Chairman of the Royal Opera House and the National Portrait Gallery I care deeply about the arts being as accessible as possible and their educational value. I decided to participate in the auction to secure the painting for the British public.”