One Third of U.S. Museums Have Not Reopened, Survey Says and More: Morning Links from November 18, 2020

One Third of U.S. Museums Have Not Reopened, Survey Says and More: Morning Links from November 18, 2020

A survey published by the American Alliance of Museums shows that nearly one third of museums have not reopened since the pandemic’s shutdown in March. “The financial state of U.S. museums is moving from bad to worse,” the organization’s president, Laura Lott, said.  [The New York Times]

Anonymous Was a Woman has named its 2020 grantees, who will each get $25,000. The winners include Linda Goode Bryant, Chitra Ganesh, and Virginia Jaramillo.  [ARTnews]

Egyptian archaeologists have discovered more than 100 painted sarcophagi at the ancient necropolis of Saqqara, in what they are calling “the biggest discovery in 2020.” [The Art Newspaper] 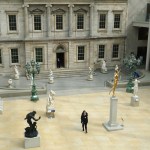 The organizers of the 13th edition of the Gwangju Biennale in South Korea have announced the list of 69 artists who will participate in the exhibition next February, including Cecilia Vicuña, Tishan Hsu, and Lynn Hershman Leeson.  [ARTnews]

Real estate billionaire Sheldon Solow, who owned a significant collection of modern art and who is the seller of a Botticelli painting that will be auctioned in January, has died at 92. [ARTnews]

Artist and curator Marion von Osten has died at 57. She recently organized a major exhibition titled “Bauhaus Imaginista,” which opened in 2019. [Monopol]

Magnum photographer Bruno Barbey, who created famous images of the student protests in 1968 Paris, has died at 79. [The New York Times]

A still-life painting by Winston Churchill dating to the 1930s sold for £1 million in London this week. [Yahoo! Lifestyle]

Here’s a look at filmmaker and artist Garrett Bradley’s multi-channel installation America (2019), which will go on view at the Museum of Modern Art in New York this month.  [The Art Newspaper]

Kelsey Ables reviews the installation of two recent acquisitions, sculptures by Huma Bhabha and Sterling Ruby, by the Hirshhorn Museum and Sculpture Garden in Washington, D.C. [The Washington Post]

James Tarmy looks at art historian Aby Warburg’s Bilderatlas Mnemosyne, a project that aims “to trace the impact of the ancient world on modernity” through images and which is subject of an online exhibition. [Bloomberg]