The board of MoMA PS1 in New York will undergo a regime change, as its chair of the past 10 years vacates the position to take on a new role within the institution. Agnes Gund, who has chaired the board from 2010 to 2020, will step down from her post to become the chair of PS1’s diversity, equity, and inclusion committee. Sarah Arison, formerly the board’s co–vice chair, will become the chair of the museum’s board.

Gund, who is also a board member at PS1’s sister institution, the Museum of Modern Art, is one of the most high-profile benefactors of her kind in the United States. The subject of a documentary by her daughter that was released earlier this year, Gund made headlines in 2017 when she sold a $165 million Roy Lichtenstein painting to form the Art for Justice Fund, which supports initiatives focused on mass incarceration, including PS1’s current exhibition “Marking Time: Art in the Age of Mass Incarceration.” 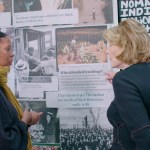 “I am honored to take on this role as Chair of the PS1 Board of Directors, and humbled to continue Aggie Gund’s legacy of inspirational leadership,” Arison said in a statement.

Arison is the founder of a grant-making organization that offers funds to emerging artists, and she serves as president of the American Ballet Theater and the chair of the education committee at the Brooklyn Museum, as well as a trustee at MoMA, Lincoln Center, and other institutions. Her position as co–vice chair will be filled by Australian collector and art patron Simon Mordant, who previously served as chairman of the Museum of Contemporary Art Australia in Sydney.

The news comes roughly six months after PS1 said it was undergoing its “most serious financial crisis” ever. In April, the museum furloughed around 70 percent of its workforce. A PS1 spokesperson told ARTnews in September that most of the 47 furloughed workers were brought back, though 18 of them had been laid off.

In the announcement about the board changes, PS1 said it had launched a $5 million fund intended to achieve what it called “long-term fiscal sustainability.” Almost all of those funds have already been raised, with Gund having put up $2.5 million toward the creation of a new department focused on the museum’s relations with its surrounding community.

In a statement, PS1 director Kate Fowle said, “With the support of our Board and generous donors, we aspire to transform PS1 into a generative contemporary art institution that sits at the intersection of local allyship and global connectivity.”