Mississippi to remove state flag, the last to display the Confederate battle emblem

The Mississippi state legislature voted on Sunday to replace its state flag, the last in the nation to display the Confederate battle emblem. The removal of the flag marks the latest Confederate symbol to topple in the weeks following George Floyd’s death as activists have called for a reexamination of the racism that exists in all corners of society.

The bill now goes to the desk of Governor Tate Reeves, who on Saturday morning said he would sign the legislation into law, reversing resistance to a legislature-led change to the flag. Mississippians will vote on a replacement flag in the November election. According to the legislation, the current flag design cannot be an option.

“I would guess a lot of you don’t even see that flag in the corner right there,” said Mississippi state Representative Ed Blackmon, who is black, during public comment on Saturday. “There are some of us who notice it every time we walk in here, and it’s not a good feeling.”

CONTEXT: Flags of the Confederate States of America

Since the end of the American Civil War, private and official use of Confederacy’s flags, particularly the battle flag, has continued amid philosophical, political, cultural, and racial controversy in the United States. These include flags displayed in states; cities, towns and counties; schools, colleges and universities; private organizations and associations; and by individuals.

FIRST FLAG: The “Stars and Bars” (1861–1863) – The first official national flag of the Confederacy, often called the Stars and Bars, flew from March 4, 1861, to May 1, 1863. It was designed by Prussian-American artist Nicola Marschall in Marion, Alabama, and resembled the Flag of Austria, with which Marschall would have been familiar. The “Stars and Bars” flag was adopted March 4, 1861, in the first temporary national capital of Montgomery, Alabama, and raised over the dome of that first Confederate capitol. Marschall also designed the Confederate army uniform. 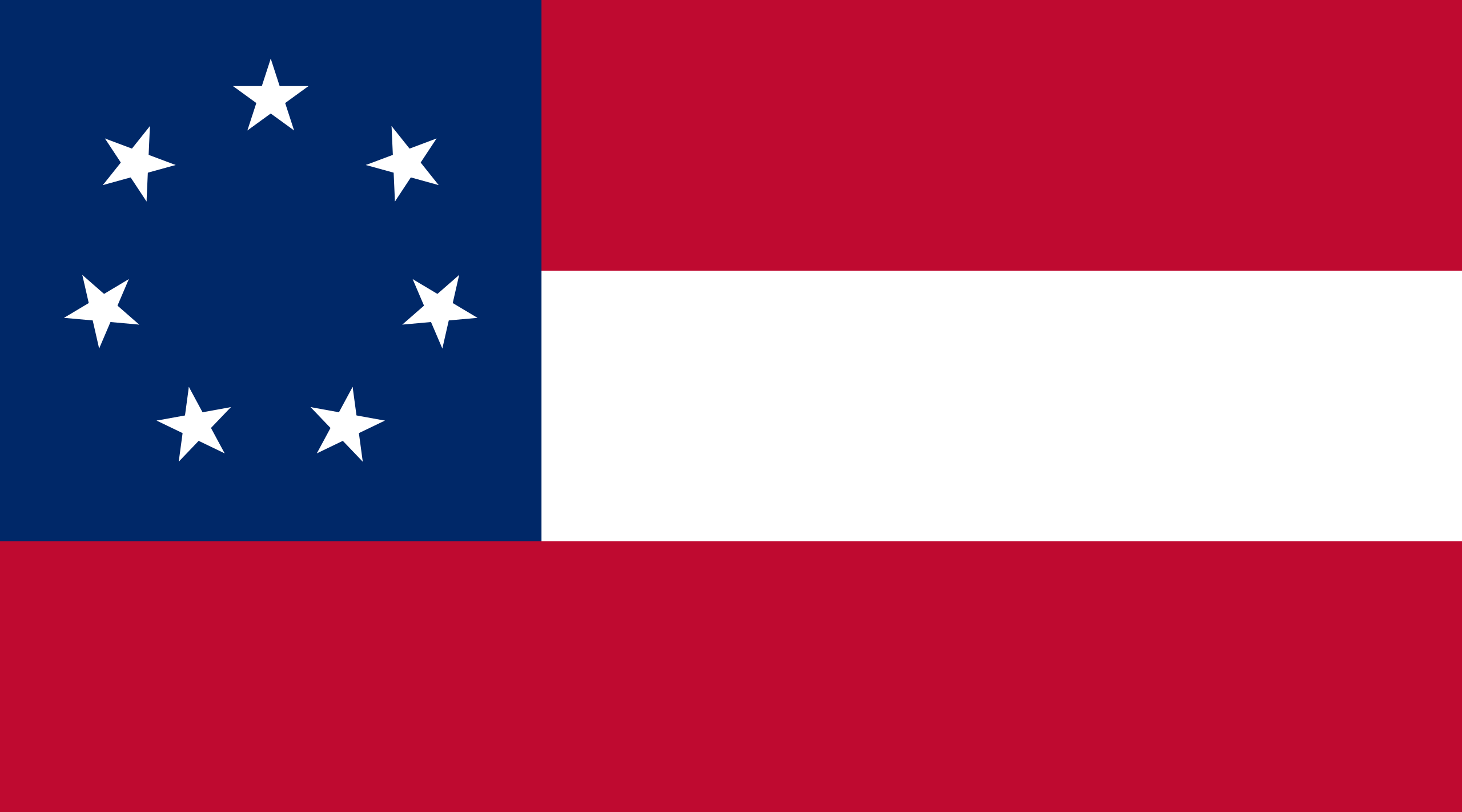 A monument in Louisburg, North Carolina, claims the “Stars and Bars” “was designed by a son of North Carolina / Orren Randolph Smith / and made under his direction by / Catherine Rebecca (Murphy) Winborne. / Forwarded to Montgomery, Ala. Feb 12, 1861, / Adopted by the Provisional Congress March 4, 1861”.

One of the first acts of the Provisional Confederate Congress was to create the Committee on the Flag and Seal, chaired by William Porcher Miles, a congressman and Fire-Eater from South Carolina. The committee asked the public to submit thoughts and ideas on the topic and was, as historian John M. Coski puts it, “overwhelmed by requests not to abandon the ‘old flag’ of the United States.” Miles had already designed a flag that later became known as the Confederate Battle Flag, and he favored his flag over the “Stars and Bars” proposal. But given the popular support for a flag similar to the U.S. flag (“the Stars and Stripes” – originally established and designed in June 1777 during the Revolutionary War), the “Stars and Bars” design was approved by the committee.

When the American Civil War broke out, the “Stars and Bars” caused confusion on the battlefield at the First Battle of Bull Run because of its similarity to the U.S. flag, especially when it was hanging limp, down on the flagstaff. The “Stars and Bars” was also criticized on ideological grounds for its resemblance to the U.S. flag. Many Confederates disliked the Stars and Bars, seeing it as symbolic of a centralized federal power the Confederate states were seceding from. As early as April 1861, a month after the flag’s adoption, some were already criticizing the flag, calling it a “servile imitation” and a “detested parody” of the U.S. flag. In January 1862, George William Bagby, writing for the Southern Literary Messenger, wrote that many Confederates disliked the flag. “Every body wants a new Confederate flag,” Bagby wrote. “The present one is universally hated. It resembles the Yankee flag and that is enough to make it unutterably detestable.” The editor of the Charleston Mercury expressed a similar view: “It seems to be generally agreed that the ‘Stars and Bars’ will never do for us. They resemble too closely the dishonored ‘Flag of Yankee Doodle‘ … we imagine that the ‘Battle Flag‘ will become the Southern Flag by popular acclaim.” William T. Thompson, the editor of the Savannah-based Daily Morning News also objected to the flag, due to its aesthetic similarity to the U.S. flag, which for some Confederates had negative associations with emancipation and abolitionism. Thompson stated in April 1863 that he disliked the adopted flag “on account of its resemblance to that of the abolition despotism against which we are fighting.”

Over the course of the flag’s use by the Confederacy, additional stars were added to the flag’s canton, eventually bringing the total number of stars on the flag to thirteen. This reflected the Confederacy’s claims of having admitted Kentucky and Missouri into the Confederacy. Although they were represented in the Confederate Congress for the duration of its meetings, and had shadow governments made up of deposed former state politicians, neither state was ever fully controlled or administered by the Confederacy. The first showing of the 13-star flag was outside the Ben Johnson House in Bardstown, Kentucky; the 13-star design was also in use as the Confederate navy’s battle ensign.

SECOND FLAG: The “Stainless Banner” (1863–1865) – During the solicitation for a second Confederate national flag, many different types of designs were proposed, nearly all based on the battle flag, which by 1863 had become well-known and popular among those living in the Confederacy. The Confederate Congress specified that the new design be a white field “…with the union (now used as the battle flag) to be a square of two-thirds the width of the flag, having the ground red; thereupon a broad saltire of blue, bordered with white, and emblazoned with mullets or five-pointed stars, corresponding in number to that of the Confederate States.” 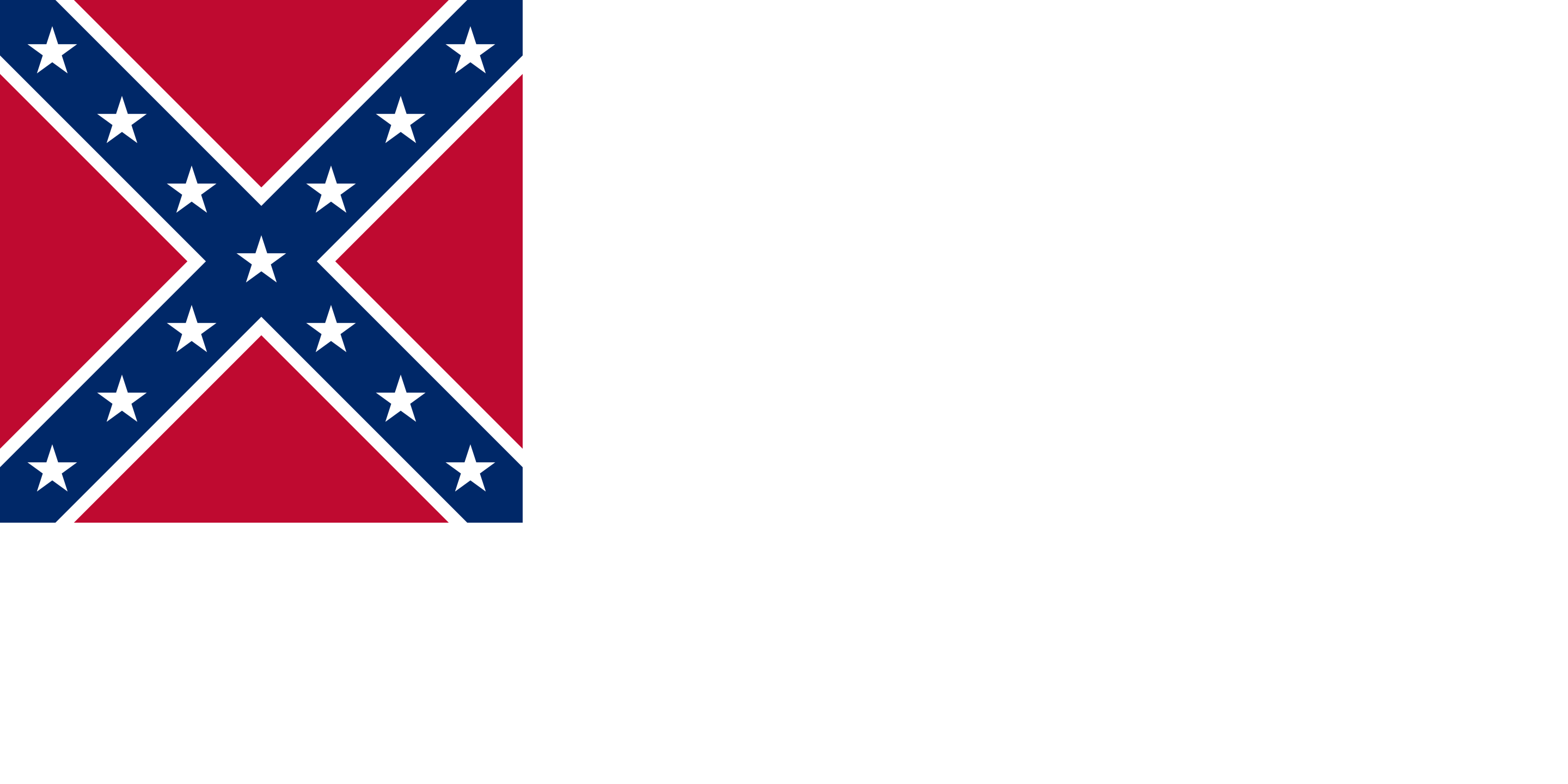 The flag is also known as the Stainless Banner, and the matter of the person behind its design remains a point of contention. On April 23, 1863, the Savannah Morning News editor William Tappan Thompson, with assistance from William Ross Postell, a Confederate blockade runner, published an editorial championing a design featuring the battle flag on a white background he referred to later as “The White Man’s Flag.” In explaining the white background, Thompson wrote, “As a people we are fighting to maintain the Heaven-ordained supremacy of the white man over the inferior or colored race; a white flag would thus be emblematical of our cause.” In a letter to Confederate Congressman C. J. Villeré, dated April 24, 1863, a design similar to Thompson’s was proposed by General P. G. T. Beauregard, “whose earlier penchant for practicality had established the precedent for visual distinctiveness on the battlefield, proposed that ‘a good design for the national flag would be the present battle-flag as Union Jack, and the rest all white or all blue’….The final version of the second national flag, adopted May 1, 1863, did just this: it set the St. Andrew’s Cross of stars in the Union Jack with the rest of the civilian banner entirely white.”

The Confederate Congress debated whether the white field should have a blue stripe and whether it should be bordered in red. William Miles delivered a speech supporting the simple white design that was eventually approved. He argued that the battle flag must be used, but for a national flag it was necessary to emblazon it, but as simply as possible, with a plain white field. When Thompson received word the Congress had adopted the design with a blue stripe, he published an editorial on April 28 in opposition, writing that “the blue bar running up the centre of the white field and joining with the right lower arm of the blue cross, is in bad taste, and utterly destructive of the symmetry and harmony of the design.” Confederate Congressman Peter W. Gray proposed the amendment that gave the flag its white field. Gray stated that the white field represented “purity, truth and freedom.”

Regardless of who truly originated the design of the Stainless Banner, whether by heeding Thompson’s editorials or Beauregard’s letter, the Stainless Banner was officially adopted by the Confederate Congress on May 1, 1863. The flags that were actually produced by the Richmond Clothing Depot used the 1.5:1 ratio adopted for the Confederate navy’s battle ensign, rather than the official 2:1 ratio.

Initial reaction to the second national flag was favorable, but over time it became criticized for being “too white.” Military officers also voiced complaints about the flag being too white, for various reasons, such as the danger of being mistaken for a flag of truce, especially on naval ships, and that it was too easily soiled. The Columbia-based Daily South Carolinian observed that it was essentially a battle flag upon a flag of truce and might send a mixed message. Due to the flag’s resemblance to one of truce, some Confederate soldiers cut off the white portion of the flag, leaving only the canton.

The first official use of the “Stainless Banner” was to drape the coffin of General Thomas J. “Stonewall” Jackson as it lay in state in the Virginia capitol, May 12, 1863. As a result of this first usage, the flag received the alternate nickname of the “Jackson Flag”.