London’s Victoria & Albert Museum will cut its staff by 10 percent. The 103 roles set to be lost are mainly in the the retail and visitor experience departments. [The Art Newspaper]

At an event called “Artists for Biden” last night, Kamala Harris addressed her love of contemporary art in a conversation with Catherine Opie, Carrie Mae Weems, and Shepard Fairey. Here’s what she had to say. [Bloomberg]

Although museums are often criticized for the whiteness of the art collections, their fashion holdings tend to exclude Black creators, too. [The New York Times] 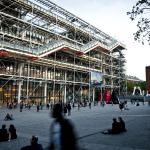 The Centre Pompidou in Paris could close for three years to undergo “essential” renovations. The news comes as the museum prepares to open a major space in Massy, France. [The Art Newspaper]

The National Portrait Gallery in Washington, D.C. will devote a show to works featuring First Ladies of the United States. Included will be photography by Annie Leibovitz and the dress worn by Michelle Obama in Amy Sherald’s painting of her. [The New York Times]

Sweden has set aside $1.1 million for the creation of its first Holocaust museum, whose focus will be survivors hailing from the country. [Jewish Telegraphic Agency]

Kyle Chayka recommends eight books for getting through creative block, including works by Lawrence Weschler and Octavia E. Butler. [ARTnews]

The National Gallery’s long-awaited Artemisia Gentileschi retrospective gets a five-star review, with Jonathan Jones calling the exhibition the “most thrilling” one he has ever seen at the London museum. [The Guardian]

For the past couple years, artist Dawn Markosian has been creating Santa Barbara, a soap opera–like film and photography project that grapples with her mother’s choice to leave her father. [The New York Times]