Why does late-19th-century Paris continue to hold such an allure?

In 1848, the debris of the revolution soiled the city’s streets, leaving its growing population in squalor and stench. Napoleon III responded by assigning the urban planner Baron Haussmann the task of redesigning and modernizing Paris, to make it the crown jewel of Europe. Over 17 years, the capital was ripped and gutted to make an interconnected network of long avenues, wide boulevards, and new bridges, clearing space for landmarks, like the Palais Garnier opera house. Public life now took place along tree-lined streets and parks decorated with street furniture, in cafés and theaters, and atop atmospheric roofs. The mandate was to see and be seen. Grand fashion houses were established, and magazines around the world presented haute couture. Born wealthy and male in Paris in 1832, Édouard Manet was the ideal flâneur for this new world—a man with time and liberty to observe it all with cool detachment, and to capture it in paintings of the everyday lives of people, social events, and public scenes.

There are now 49 artworks by Manet in the permanent collection of the Musée d’Orsay in Paris. Yet when the artist died in 1883, only 51 years old, he left behind a studio full of paintings for which his widow Suzanne struggled to find buyers. His Olympia (1863), now his most famous work, heralded by many as the start of modern art, remained unsold. Though the Impressionists admired his work, he received little support from the art establishment. When Olympia (1863) was submitted to the Salon in 1865, it was immediately met with intense criticism and repulsion. The painting was hung extremely high to protect it from physical attacks. From that height, the direct, even confrontational, glare of the slender white woman at its center, a courtesan, is momentarily broken. She is reclining nude on her chaise lounge laying atop a floral shawl, wearing nothing more than a few accessories: a black ribbon necklace, pearl earrings, a wide gold bracelet, a single pink orchid in her hair, and Louis XV slippers on her crossed feet. At the time, it was no doubt even harder to make out two parts of the painting that have been routinely overlooked in the work: the shrieking black cat at the foot of the bed and the Black maid standing behind the nude woman, giving her an elaborate bouquet of flowers. 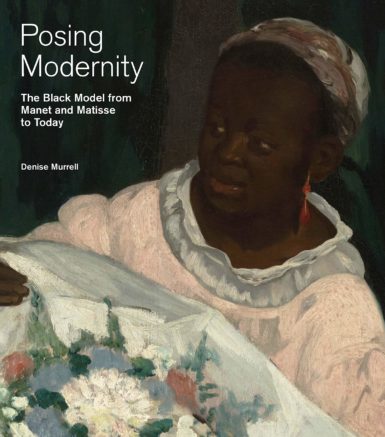 When dusk set in Paris, Haussmann’s gas lamps were lit and the “absinthe hour” of the boulevards began, working women and their suitors circulating among 200 legalized brothels and closed houses. The scene in Olympia (1863) was bracingly contemporary and uniquely Parisian, and therein was the offense: it affronted the conservative values of the bourgeoisie, making the private public. The picture had its proponents, though. Ardent defenders of Manet later organized a posthumous public subscription, raising 20,000 francs from almost 100 patrons so that Olympia (1863) would be acquired by the state. In November of 1890, it was accepted by the Musée du Luxembourg.

In the years since, countless art historians have closely examined the work, and some feminist scholars have celebrated it for its acknowledgement of the power of Olympia’s shameless participation in sex work. Her identity is known: Victorine Meurent, a friend and painter in her own right, modeled for the picture. However, the Black model, Laure, has remained essentially nameless—apparently unworthy of subjecthood in art history—for the last 150 years.

That changed a few years ago, when the Columbia University doctoral candidate, Denise Murrell, published a dissertation titled “Seeing Laure: Race and Modernity from Manet’s Olympia to Matisse, Bearden and Beyond” (Columbia University, 2013). Her work broke the silence around the French Caribbean woman named Laure and grew into an ambitious curatorial examination of Black models in Western art, from the 19th century up through the present. The first iteration of her doctoral research opened at the Wallach Art Gallery at Columbia University in New York in 2018 as “Posing Modernity,” and earlier this year the exhibition was extended significantly at the Musée d’Orsay to include archival materials, personal correspondence, and films under the name “Black Models” (through July 21). It was an essential and overdue exhibition speaking to the visible invisibility of Black models in French art over two centuries, from the French Revolution through the two World Wars. 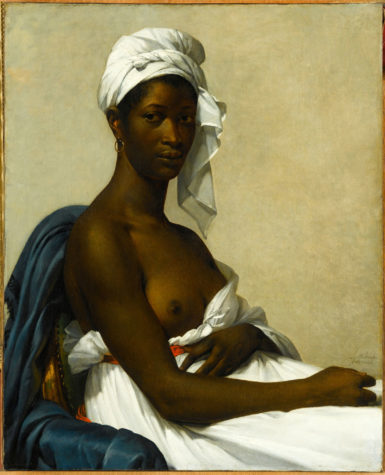 Murrell’s new interpretations and in-depth research of key periods in social and art history resulted in the writing of dignified new biographies for previously unknown Black sitters and muses, and the proposal of new titles for artworks by Géricault, Matisse, Gauguin, Picasso, and Cézanne where those depicted had previously been reduced to “negro,” “mulatto,” or “câpresse.” For Marie-Guillemine Benoist’s Portrait of a Black Woman (1800), for instance, Murrell offered Portrait of Madeline. Benoist’s portrayal of Madeline is a half-view of a slim Black woman in the tone of mahogany—secondary to her deep shade, you notice her bare right breast and stoic stare. Her white Empire-style gown is accentuated by a blue shawl and red ribbon tied around her waist, an obvious reference to the French Tricolore. When shown at the 1800 Salon, just six years after the first abolition of slavery in France, Benoist hid the name of the recently emancipated young Guadeloupean woman who traveled to France as her brother-in-law’s domestic servant, likely for fear of rebuttal for daring to depict this Black woman as an emblem of French liberty. One critic, Charles Thévenin, lamented Benoist’s portrait as “a sublime blurred tache” [stain], demoting Madeline to an unclean inconvenience, non-human. Even the relative freedom that Madeline and her fellow Black Antilleans had won would be short-lived—in 1802, Napoleon would reinstate slavery in the French colonies.

The exhibition also highlighted the growing communities of Black men and women in 19th-century France. Black women, at the time, were often employed as wet nurses by high-society families convinced by the stereotype that they produced high-quality breast milk and had good child-rearing skills. And the second and final abolition of slavery in the French colonies in 1848 saw an expanded Black presence in Paris, primarily in the northern Ninth and Seventeenth arrondissements, home to Manet and the Impressionists in the 1860s. A notebook belonging to Manet confirmed that Laure herself lives at 11 rue Vintimille, just 10 minutes from Manet’s studio. 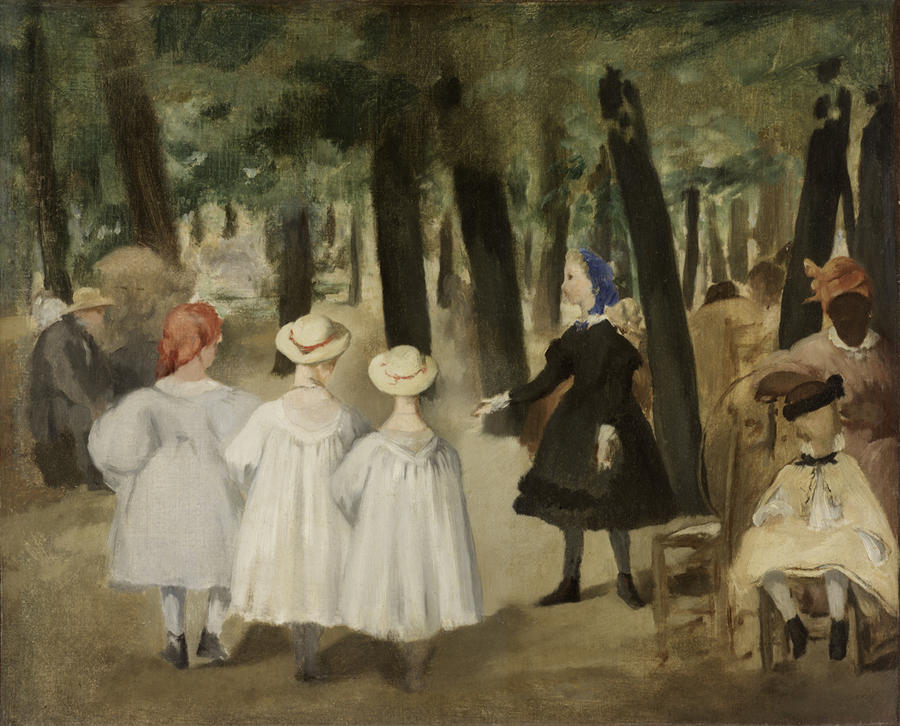 Manet is known to have made two more pictures of Laure over the space of 12 months, beyond the notorious Olympia. In Children in the Tuileries Gardens (1861–62) we see a Black nursemaid in the rightmost side of the painting amongst her employer’s family, an everyday scene for anyone strolling through the Tuileries potentially on their way to the Louvre. Four elaborately dressed children meander around the park whilst the smallest of them sits in front of Laure, who is relaxed, under the shade of a tree. And in La négresse (Portrait of Laure), 1863, broad brushstrokes of deep-brown makeup around her round face and neck sit against a deep olive background, while the rest of her body is shrouded in a plain off-the-shoulder dress. Her natural hair is covered by a bright headwrap. Laure’s portrait reads as a study rather than a finished painting, but despite its blurred lines, the focal point is unmistakable: the smile on her face. Dated late 1862, a note in a book belonging to Manet describes a model as “Laure, trés belle négresse” (Laure, very beautiful Black woman).

Manet’s brief but pointed fixation on Laure involved him depicting her not as the exotic other but an individualized member of the French working-class in a small, visible, but marginalized Black French community. We will never know enough of Laure’s complete story, but she has now, at least, secured a concrete place in art history, and been rendered as an autonomous person, by Murell. As the curator put it in a recent interview, “I wanted to make clear that Laure wasn’t an imagined figure. She’s a representation of the racial reality of 1860s Paris. I wanted to show that she is occupying one of several social roles that free black Parisians occupied at this particular moment.”