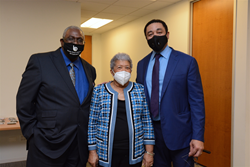 The State of Illinois spends several billion dollars on media, advertising and marketing, annually. When you look at the spend with Black media, it’s less than 1 percent. This is not full participation,” says Larry Ivory, President-CEO, Illinois State Black Chamber of Commerce.

Members of the Black press and the NAACP joined the Illinois State Black Chamber of Commerce (ISBCC) at a press conference for the launch of the ISBCC’s latest Black business empowerment initiative – the Coalition for Black Media Equity. The advocacy organization works to bring solutions that directly help reduce economic disparities impacting Black communities and hopes the CBME will result in the awarding of more state contracts to Black-owned businesses.

“The State of Illinois spends several billion dollars on media, advertising and marketing, annually. When you look at the spend with Black media, it’s less than 1 percent. This is not full participation,” says Larry Ivory, President-CEO, Illinois State Black Chamber of Commerce. Ivory explains that the “Sheltered Market” was enacted over twenty years ago by the Business Enterprise Council. A Sheltered Market helps ensure equal opportunities for businesses owned by women, minorities, and persons with disabilities. “The BEP has the responsibility to help improve minority participation across all sectors. By law, if there exists discrimination, a Sheltered Market must be established to correct the discrimination. We declared a Sheltered Market unanimously as a council.”

Although the ISBCC advocates for Black businesses across all industries, the Coalition for Black Media Equity was specifically formed to support Black-owned media and communications firms because the ISBCC says these businesses, most recently, have been shut out of the contracts awarded to market COVID-19 information to the Black community.

“The Black media has been grossly overlooked for way too long. We applaud the ISBCC for fighting for us,” says Dorothy Leavell, editor and publisher of the Crusader Newspapers and co-founding member of the Coalition. “The NAACP would like to see more Black media be involved in important campaigns, like COVID-19,” echoes NAACP president Teresa Haley. Other speakers at the press conference included Hermene Hartman of N’DIGO Megapaper and famed actor/advocate Harry Lennix returned to his hometown to lend his support for economic parity for Black businesses.

The group says that although Illinois’ Business Enterprise for Minorities, Women, and Persons with Disabilities Act (30 ILCS 575/) establishes, as an aspirational goal, that not less than 20 percent of the total dollar amount of State contracts be awarded to businesses owned by minorities, females, and persons with disabilities, that rarely, if ever, happens and Blacks bear the brunt of this disparity.

In addition to asking the State of Illinois to follow the law and consistently institute more Sheltered Markets, as a follow up to the press conference, the Coalition for Black Media Equity will meet with and audit the marketing spend of 10 departments statewide to learn the marketing strategy of each, along with their current advertising spend with Black advertising agencies. The group also is requesting a meeting with Governor JB Pritzker to share their concerns, audit findings, and ideas for a positive resolve.

The mission of the Illinois Black Chamber of Commerce is to empower Black enterprises in order to strengthen Black communities. Their goal is for all Black businesses in Illinois to become sustainable, high-growth enterprises by assisting with building their capacity to compete effectively for local, state, and federal commercial contracting.