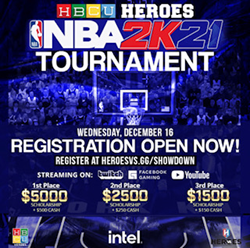 “I’m proud to be a part of this HBCU Heroes gaming collaboration,” said Tarik Cohen, Chicago Bears running back and proud HBCU alum of North Carolina A & T State University (NCAT). “Any time I can combine my passion for gaming and eSports with giving back to my alma mater, it’s a no-brainer.

“Gaming is a $160 billion per year industry,” said Pennywell. “Our mission is to engage HBCU students nationwide to compete for their share of the pie and provide HBCUs with technology, ESports labs, and curriculum to build sustainable programs.”

HBCU Heroes is producing this event as a gateway to HBCU gamers, who are experts at playing with friends, but may not have had the opportunity to compete in a league or tournament.

“We welcome HBCU gamers of all levels to this NBA2K showdown,” said Lynch, an NBA veteran with the Los Angeles Lakers, Philadelphia Sixers, Charlotte Hornets, and more.

“We also want to encourage young women to register as well. Some of the best players I’ve seen are girl gamers. This tournament is definitely for them,” added Pennywell.

Celebrities and athletes will also get in on the action. “I’m proud to be a part of this HBCU Heroes gaming collaboration,” said Tarik Cohen, Chicago Bears running back and proud HBCU alum of North Carolina A & T State University (NCAT). “Any time I can combine my passion for gaming and eSports with giving back to my alma mater, it’s a no-brainer. I love the competitive aspect of gaming, but today with streaming platforms there are ways to make a career in the field and giving younger people exposure to that world and helping them get more info on it is something that is important to me. I think with the appropriate resources and exposure, our HBCUs can begin to inspire students to excel in the gaming, tech and eSports industry.”

Cohen faces off in an exhibition match VS. Boston Celtics NBA2K League gamer Sheriff Cruz aka FTW. HBCU Heroes will donate $3,500 to the HBCUs of choice on behalf of all exhibition competitors with $2500 for the winner’s selected HBCU and $1000 to the runner up’s selected HBCU to advance eSports efforts.

“As an NBA veteran, I’m happy to play in this tournament to amplify awareness for HBCUs,” said Etan Thomas, former player with the Timberwolves, OKC Thunder, and Hawks. Thomas, who competed against Lynch in the NBA now faces off against him in this exhibition match of NBA2K.

“Cheyney is definitely in,” said Julani Ghana, Director of Student Success & Retention Academic Success Center at Cheyney State University. “We have had some tournaments in the residence hall and have been talking about formalizing a Club of sorts on campus. So along with pulling for our student gamers to win, we’ll obviously be pulling for Lynch as well.” This is a historical moment as Cheyney is the oldest HBCU in the nation and now among the first to make the move into eSports for its students.

“This event is the right step to start educating the African American community on the benefits of the esports industry,” said Christopher Turner, GM and Head Coach for Southern University and Southern University Lab School. “The opportunities of STEM and STEAM careers need to be a focus for this generation and the next.”

“HBCU Heroes is committed to access, opportunity, and support for HBCU students in the growing industry of eSports,” said Kwame Jackson, Corporate Sponsorship Director & Brand Strategist for HBCU Heroes. “In the African-American community, the digital divide persists. Some HBCU students don’t even have laptops to complete their COVID-19 enforced distance-learning, let alone devices to compete in tournaments.” ​

For this reason, HBCU Heroes is also donating gaming consoles to several returning players to allow them to participate. Unlike many tournaments, a lack of a gaming device won’t be a barrier to entry for students to compete.

“Morris Brown College became the first college in Georgia to offer a certificate and degree program in Esports Performance. We are excited about the new program and expect vast interest. We look forward to becoming a leader in Esports, not just within higher education, but beyond,” said Dr. Kevin E. James/President.

HBCU Heroes is partnering with Metal Esports in producing the tournament. “As leaders in the gaming industry, our goal is to bridge the gap,” said Jon Bukosky, Partner in Metal. “It’s time to provide real opportunities to gaming at an infrastructure level that includes eSports labs, curriculum, merchandising, and opportunity that will be a gamechanger to HBCUs along with a sustainable platform post-COVID.”

“As the first HBCU to boast an eSports and Gaming trifecta — Esports and Gaming Management academic program/Certificate program, Esports Lab, and Esports Club/Game Development Club — we are thrilled to support our eSports Club President as he showcases his NBA 2K skills while proudly representing Johnson C. Smith University (JCSU) in the HBCU Esports Holiday Showdown hosted by our partner, the HBCU Heroes organization,” said Dr. BerNadette Lawson-Williams, Advisor of JCSU’s Esports and Gaming Trifecta, housed in the University’s Metropolitan College of Professional Studies.

Pennywell and Bukosky will launch Heroes VS in January, an HBCU eSports league to amplify access, STEM and media careers (in gaming, coding, and game development), and more.

Registration is open to all currently enrolled HBCU students at http://www.HeroesVS.gg/showdown.

While the players will be engaged in the competition, those who follow eSports can also get in on the action by watching the livestream. The HBCU ESPORTS HOLIDAY SHOWDOWN will stream live on Twitch, Facebook Gaming, YouTube, and more on Wednesday, December 16 at 2 p.m. ET.

For more information, to sponsor or participate, visit http://www.HBCUHeroes.org or contact Tracey Pennywell at traceypennywell@hbcuheroes.org.

HBCU Heroes was founded by NBA veteran George Lynch and entrepreneur Tracey Pennywell. With corporate branding strategy deployed by Kwame Jackson, the three have poised this nonprofit as one of the leaders in the HBCU space. HBCU Heroes sits at the nexus of culture, community and commerce with partnerships designed to create maximum impact at the highest level to uplift the HBCU community. Their proven track record with fundraisers & streamathons, and digital funding drives have uniquely positioned them as a premiere one-stop shop, providing content and social impact initiatives that resonate directly with the HBCU universe. National coverage includes Forbes, Sports Illustrated, BET, Undefeated, Black Enterprise, ESPN, Black News Channel and more. Visit http://www.HBCUHeroes.org.