The artist collective Frankfurter Hauptschule claims to have stolen one of Joseph Beuys’s 1985 Capri Battery works from an exhibition in Oberhausen, Germany. According to a report by the German newspaper Süddeutsche Zeitung, the group says that they have given the artwork to a museum in Tanzania as part of a “symbolic act of restitution to the former German colony.”

In a video posted to YouTube, Frankfurter Hauptschule appears to document the heist, which the group claims took place on October 18. That video also includes footage of them transporting the work to Tanzania’s Iringa Boma museum. The group has titled their campaign “Bad Beuys go Africa,” and a description accompanying the video states that the Beuys work is now on permanent display at that institution. 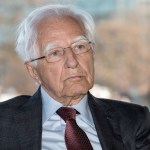 “The museum, which is located in a former military hospital of the German colonial rulers, now displays the ‘Capri-Battery’ alongside traditional objects of craftsmanship of the Hehe tribe,” the description reads. “Under the colonial regime, art objects, cultural assets and skulls of Hehe leaders were stolen from Iringa and brought to Germany in inextricable numbers.”

Süddeutsche Zeitung reports that the missing Beuys work “went unnoticed for days” and German police are now investigating the matter. The piece had been on loan to the theater in Oberhausen from the LWL Museum for Art and Culture in Münster, which was reportedly notified about the missing work on October 22.

Beuys’s Capri Battery pieces, which each comprise a yellow lightbulb and a lemon, were created by the artist on the Italian island while he was recovering from an illness. The 200 existing Capri Battery works, which can be found in the collections of the National Galleries of Scotland, the Museum of Modern Art in New York, the RISD Museum, and other institutions, take a playful approach to issues of energy and renewability.