Weeks after its discovery, a startling case of vandalism at Berlin’s most popular museums remains without an explanation or a suspect. On Tuesday night, German authorities released details confirming local media reports that more than 70 artworks and artifacts on Berlin’s Museum Island—which includes the Pergamon Museum, the Neues Museum, and the Alte Nationalgalerie—had been sprayed with an oily substance.

Per the outlet Deutsche Welle, authorities have since faced criticism for their decision to refrain from confirming the vandalism for nearly three weeks after initial reports by various German publications, including Die Zeit. Carsten Fröhlich, Senate head for property offenses at the the State Criminal Police Office, said his office remained silent on the matter so investigators could privately inform the lenders of the vandalized works of the crime and “to determine the extent of the damage to property.” He added that the number and size of museums involved are complicating factors in the investigation. 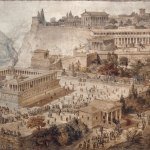 “To date, we are still unable to determine when the damage to property actually occurred,” he said, though police have contacted visitors who bought museum tickets on the purported day of the attack for information.

German media outlets, including Der Tagesspiegel and Deutschlandfunk radio, reported that the vandalism was committed on October 3, a national holiday commemorating the reunification East and West Germany in 1990. The significance of the crime being committed on that date has fueled speculation over whether the act was politically motivated.

October 3 was also the first day the cultural center lifted its lockdown, which has been in place since March.

In a statement released Wednesday, Germany’s minister of state for culture Monika Grütters said that the crime was “directed against artistic forms of expression, against the cultural heritage of all of us, against civil forms of debate and thus against the principles of our democratic self-image.”

Among the objects vandalized with a mysterious oily substance are 19th-century paintings, ancient Egyptian sarcophagi, including a sarcophagus, and stone sculptures. The liquid has left visible stains on the pieces. The crime was “one of the most extensive attacks on works of art and antiquities in the history of post-war Germany,” wrote Die Zeit.

The five museums comprising the Museum Island in historic central Berlin were named a UNESCO World Heritage Site in 1999. Today the complex is among the most-visited cultural institutions in the country. The Pergamon Museum, which marked its 90th anniversary this year, attracted around 1 million visitors in 2019. The museum houses the Pergamon Altar, which dates from the second century B.C.E. and is a major tourist draw. Recently the altar has been a target of  popular far-right conspiracy theorist Attila Hildmann, who has called it the “center of global satanists and Corona criminals.” According to local reports, a 3D exhibit of the altar was among those targeted.

Security issues at the museums have been an ongoing concern. In 2017, a 200-pound gold coin valued at $4.38 million was stolen from the Bode Museum. Three suspects, including a security guard, were convicted in February for the theft.

In the wake of October’s incident, Grütters said that the Berlin State Museums must again reevaluate its security measures. “It must be clarified how this much damage could have gone unnoticed, and how such attacks are to be prevented in the future,” she said.