Last week, four museums in the U.S. and the U.K. made the controversial decision to push a traveling Philip Guston retrospective to 2024. The exhibition—which was slated to open this year, and is expected to go on view at the National Gallery of Art in Washington, D.C., the Museum of Fine Arts Boston, the Museum of Fine Arts Houston, and Tate Modern in London—was to survey the late artist’s career in a contemporary context. It is to include the artist’s famed paintings and drawings featuring hooded Ku Klux Klan figures, which leaders at the institutions feared might be misunderstood by audiences.

The choice to delay the retrospective by four years was driven by a desire to reformulate the show so that it better reflects the “urgencies of the moment,” the directors of the four museums said in a joint statement on September 21. But many artists, curators, and critics said that, in postponing a show with these works included, the institutions had erred significantly. 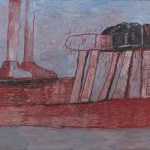 “The irony is that, if ever there was a poignant time to have these Guston images shown, it’s now,” said Michael Auping, a former curator at the Modern Art Museum Fort Worth in Texas who organized a Guston survey there in 2003.

For Auping, the show’s postponement indicated a larger difficulty on the part of museums in responding to criticisms that have been repeatedly levied against them over the past few years. “I’m sensing uncertainty and paralysis in a lot of cultural institutions, given all the changes that are happening,” he said. “They don’t know where to go—they’re afraid to make a commitment, and they’re afraid to be called out on something.”

Others echoed that sentiment—including one of the show’s curators. Mark Godfrey, a senior curator of international art at Tate Modern who worked on the now-postponed Guston show, said in a phone conversation that the museum did not include him in discussions about the show’s postponement. “The decision was not with the curators,” Godfrey said. (A Tate spokesperson denied this, saying that all four museums consulted with the curators in advance of the announcement of the delay.)

In their statement from last week, the four directors said that they aimed to bring in “additional perspectives” that would augment the museums’ presentations. But Godfrey said he had already actively tried to bring in the voices of those outside the Tate for the London version of the show. “I had been working extremely closely with a chair of the BAME network, Rudi Minto de Wijs,” he said, referring to the museum’s Black, Asian, and Minority Ethnic staff diversity group. “We had collaborated extremely well to think about Guston as an anti-racist and an ally.”

A number of Guston’s works from the late 1960s include hooded figures who navigate semi-abstract landscapes, driving together in jalopies or painting in surrealist studios. The artist, an avowed leftist active mainly during the postwar era, considered this series to be about the pervasiveness of evil and white supremacy, and Guston went so far as to label them as self-portraits of a sort. In a statement, Musa Mayer, the artist’s daughter, said, “We never see acts of hatred. We never know what is on their minds. But it is clear that they are us. Our denial, our concealment.”

Not everyone considered the works so clear in their intentions. According to the New York Times, Darren Walker, a trustee at the National Gallery and the president of the Ford Foundation, said it would have appeared “tone deaf” to host the exhibition now. A spokesperson for the Ford Foundation did not immediately respond to a request for comment on the controversy.

Others involved with the show felt that the Ku Klux Klan works by Guston are, in fact, lucid in their views. Among them is the artist Trenton Doyle Hancock, who penned an essay for the show’s catalogue on Guston’s 1930 work Drawing for Conspirators, featuring hooded figures arranged in an uneasy lamentation scene.

In an email, Hancock said that Drawing for Conspirators is a significant work when considered within the context of the artist’s biography and art history. “Guston was Jewish, and Jewish people were historically targeted by the Klan,” Hancock said. “This drove Guston’s response as an activist through the gesture of painting the Klan’s image. Guston wasn’t alone in dealing with the KKK. Black painters such as Norman Lewis and Jacob Lawrence also depicted imagery of Klan activity.”

Hancock, who has himself dealt with KKK imagery in his art, continued, “Drawing for Conspirators is constructed with the robust line weight and statuary aplomb of the WPA era. This style meant truth and strength to the working class. To see Guston’s portrayal of Klan activity in this particular style was a way to punctuate and concretize the activity as a truth.”

There have, however, been some who are not entirely opposed to the postponement of the Guston show. Critic Aruna D’Souza, who has written extensively on protests at museums led by Black artists and activists, said that, while she likes Guston’s work, other exhibitions may be better fitted to the moment than a Guston one organized by four white curators.

“I don’t know how Black audiences will react to Guston’s paintings—I suspect, since there’s no unified or univocal Black audience, there will be many different reactions,” she said. “But the idea that this is work that’s important to see now and all museums have to do is educate audiences [about] why looking at KKK figures is good for them is terribly paternalistic and condescending. At this point, more than ever, it’s important not to tell Black audiences what they should be looking at, but asking them what they want to see.”

The postponement will hold significance, she said, but only if it is remedied in a productive way. “This postponement is only meaningful and legitimate if it is genuinely tied to a real reckoning with their own institutional make-up and structures,” D’Souza continued. “If we see Philip Guston replaced by Morris Louis or something like that, then we’ll know it was actually institutional cowardice that led to the decision to postpone.”

And though the Guston show is the most high-profile instance of a museum grappling with how to present work featuring the Klan, it is not the only one in recent memory. In 2018, the Blanton Museum of Art in Austin, Texas, memorably showed a 30-foot-long painting of a Klan gathering by Vincent Valdez, who rendered his subject matter bitterly contemporary, showing one of his subjects holding an iPhone, for example. Ahead of showing the work, the museum reportedly consulted with over 100 individuals and organizations, including the mayor’s office and the Anti-Defamation League, about how best to present it.

Valdez said in an email that he felt Guston was attempting to underscore the existence of racism in his own time. To postpone a showing of Guston’s Klansmen works, Valdez said, risks undermining the artist’s vision. “If you consider reversing the logic behind this decision, imagine Philip Guston, James Baldwin, Bob Dylan, Maya Angelou, Rudolfo Anaya, Woody Guthrie, and so many other countless thinkers deciding to pull the plug during their most pressing, radical and creative moments until ‘a time at which we think that the powerful message of social and racial justice can be more clearly interpreted,’” Valdez said, quoting the directors’ statement. “As they knew then, and we know today, that time is now. Not later.”

He added, “I fear Philip Guston is rolling in his grave.”