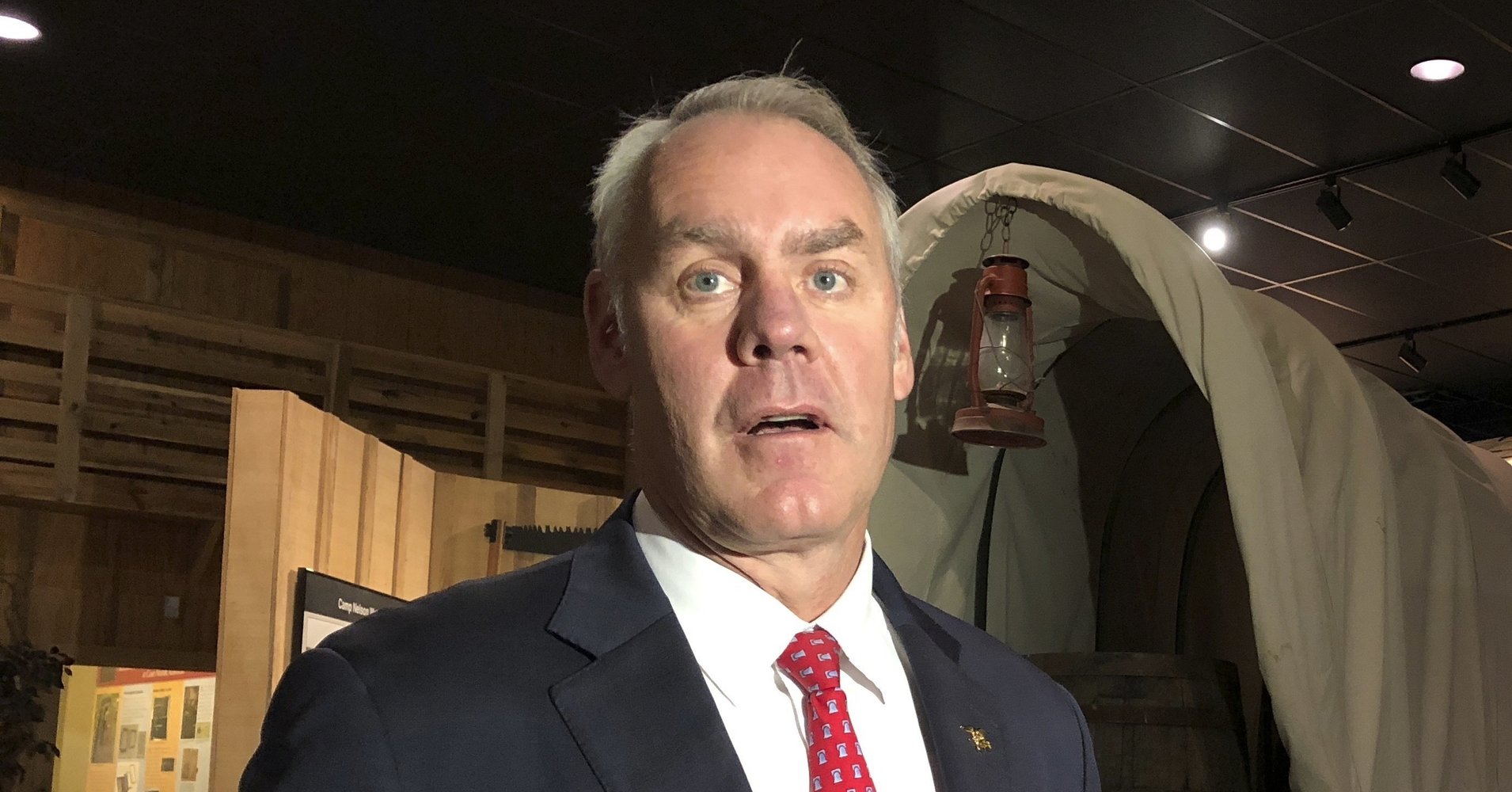 Ryan Zinke, the embattled secretary of the Interior Department, suggested in a confused comparison that Robert E. Lee, the Confederate general who fought to preserve slavery, was as much an American hero as civil rights leader Martin Luther King Jr. during a speech on Saturday, drawing renewed scrutiny of Zinke’s record on racial issues.

The secretary was speaking at a ceremony designating Camp Nelson, a Union recruitment and training depot in Kentucky for black soldiers during the Civil War, as a national monument. He compared the placement of the Martin Luther King Jr. Memorial to that of Arlington National Cemetery, the military burial ground located on Lee’s former plantation, and that of the Lincoln Memorial.

Civil rights groups condemned the remark ― which American Bridge 21st Century, a Democratic political action committee, first uncovered and which HuffPost confirmed with video posted to Facebook by a local newspaper ― as offensive and ahistorical.

“To compare Martin Luther King to Robert E. Lee is not only a dangerous comparison, it is completely historically inaccurate,” Patrisse Cullors, a co-founder of Black Lives Matter, said in an email. “Dr. King saved lives ― Robert E. Lee destroyed them.”

The NAACP praised the designation of Camp Nelson and said it was “unfortunate” that Zinke “decided to connect General Robert E. Lee to this story.”

“To attempt to link Lee’s achievements for the Confederacy which embraced White Supremacy to that of Dr. Martin Luther King, Jr. is not a slight oversight but a huge historical misappropriation that the descendants of enslaved Africans cannot accept or tolerate,” Malik Russell, an NAACP spokesman, said in an email. “Dr. King’s work united our nation and bent the moral arc toward justice, while General Lee acquiesced to the ignoble norms of his time.”

The Interior Department did not respond to a request for comment on Tuesday.

On its website, the National Park Service says it located the Martin Luther King Jr. Memorial between the Lincoln and Jefferson memorials “to reinforce the connection between these three leaders at three important moments for civil rights in our nation’s history” ― Thomas Jefferson’s promise that “all men are created equal” in the Declaration of Independence, Abraham Lincoln’s abolition of slavery and King’s push for equal rights.

The brouhaha about his latest remarks comes at a sensitive time for Zinke as he faces mounting pressure over nearly 20 federal probes, one of which the Interior Department’s internal watchdog referred to the Justice Department on Tuesday. Zinke dismissed that move as “another politically driven investigation that has no merit.” But the referral raised the specter of criminal charges, marking the sort of escalation that Scott Pruitt, the scandal-plagued Environmental Protection Agency administrator who resigned in July, never faced.

The speech on Saturday was in keeping with Zinke’s past comments on monuments to Confederate generals and gets to the heart of an increasingly partisan fight over Jim Crow-era historical revisionism. Statues commemorating historical figures from the losing side of the Civil War became popular in the early 20th century as conservative historians recast the conflict as a noble battle for states’ rights, whitewashing the central role that slavery played in the Southern states’ rebellion.

The monuments rose alongside segregation laws as symbols to “celebrate white supremacy,” Karen Cox, a history professor at the University of North Carolina, wrote in August 2017, when white nationalists rallied in Charlottesville, Virginia, to defend a statue of Lee.

A month later, Zinke came out against removing Confederate monuments, joining other top administration officials, including White House Chief of Staff John Kelly, in defending Lee’s legacy. In an interview with Breitbart last October, Zinke said the Trump administration would not remove any Confederate monuments from federal land. Taking them down, he said, could lead to Native Americans calling for the removal of statues honoring leaders who orchestrated violence against their ancestors.

“Where do you start and where do you stop?” Zinke asked. “It’s a slippery slope. If you’re a native Indian, I can tell you, you’re not very happy about the history of General [William Tecumseh] Sherman or perhaps President [Ulysses] Grant.”

To compare Martin Luther King to Robert E. Lee is not only a dangerous comparison, it is completely historically inaccurate.
Patrisse Cullors, co-founder of Black Lives Matter

Native Americans are not only unhappy with the Union generals’ treatment of them. Zinke has battled with tribal groups over the Trump administration’s decision to shrink Utah’s 1.35 million-ace Bears Ears National Monument by 85 percent. The landscape is home to thousands of Native American archeological and cultural sites, and area tribes considered it to be sacred. During a visit to the Utah monument last year, Zinke became agitated with a woman who repeatedly urged him to spend more time meeting with tribal leaders, ordering her to “be nice.”

Kate Kelly, public lands director at the left-leaning Center for American Progress, said in an statement this week that while Camp Nelson deserves monument protection, “we can’t ignore the deep irony and injustice in President Trump using the same authority to protect one chapter of America’s story, while illegally stripping protections for another national monument that honors Native American history and culture.”

The Interior Department’s reassignment of career employees has also seemed to target Native Americans. A full third of the 33 senior career staffers transferred to new jobs since Zinke became secretary were Native American, despite that group comprising less than 10 percent of the agency’s workforce, according to a Talking Points Memo analysis published in April. Several others on the list were black or Latino. The previous month, CNN reported that Zinke was telling staffers that “diversity isn’t important” or “I don’t care about diversity.”

Also in March, Zinke came under fire for greeting Rep. Colleen Hanabusa (D-Hawaii), who is Japanese-American, with “konnichiwa” after she told a story about her grandfathers being held in prison camps during World War II. And in June, HuffPost reported that Faith Vander Voort, a top spokeswoman for Zinke, published an Islamophobic blog post in 2015, arguing that a Muslim “could never serve” as president of the United States.