The final Nielsen reporting cements a 2019-20 season in which ESPN’s networks increased their audience year-over-year in every category: the regular season, bowl season, the CFP Semifinals, the CFP National Championship and College GameDay Built by The Home Depot, which delivered its most-watched season since 2015. 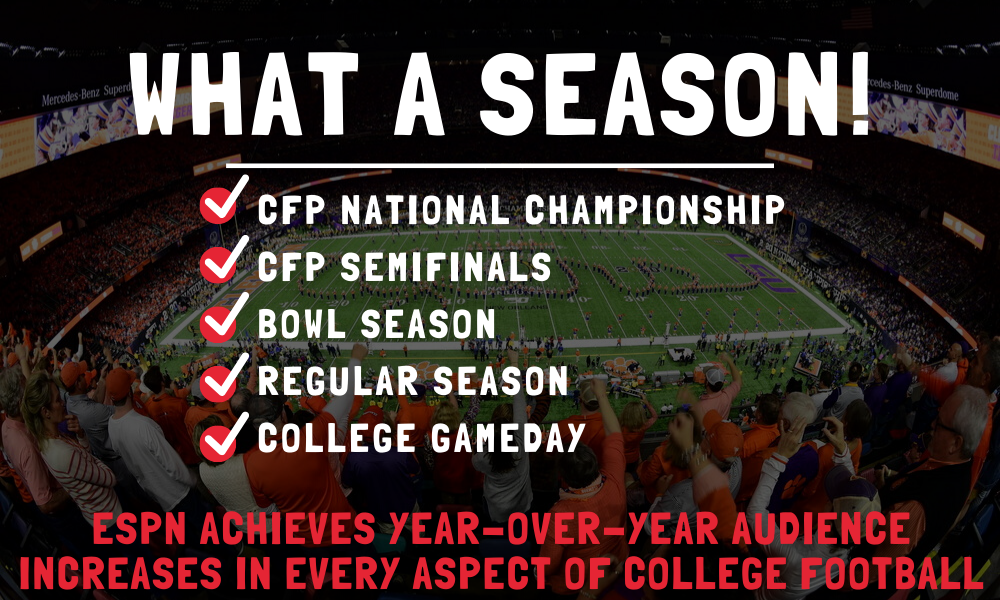 CFP National Championship: 1.7 Million Viewers Added to LSU-Clemson’s Audience
The CFP National Championship between LSU and Clemson finishes with a total live audience of 27,311,000 viewers, which includes an additional 1.7 million viewers from Nielsen’s initial reporting the day following the game. The new audience figure includes a 4.3% lift from out of home reporting (1,136,000 viewers) and an additional streaming audience of 587,000 fans.

This year’s viewership of 27.311 million is up 332,000 viewers from the last season’s Alabama-Clemson CFP National Championship final viewership (26,979,000 – including full streaming and out of home audience). The final reporting created an even larger increase between this season’s audience and last season’s final audience, as initial Nielsen reports — available the day following the game — indicated LSU-Clemson’s audience was 308,000 viewers higher than Alabama-Clemson.

CFP Semifinals: 2.2 Million Viewers Provided by Out of Home Viewing
The CFP Semifinals now average 21,487,000 viewers (two games), which includes an additional 2.2 million viewers from Nielsen’s initial reporting. The new audience figure includes a 9.6% lift from the out of home audience (1,880,000 viewers) and an additional streaming audience of 322,000 people.  In addition to setting a new high for non-New Year’s Day Semifinals, this year’s games are now up 8% from last year’s final CFP Semifinal audience. Initial Nielsen reporting showed a 6% year-over-year increase.

As in year’s past, including last season, the College Football Playoff National Championship and CFP Semifinals were multi-network presentations through ESPN’s MegaCast productions. As a result, ESPN’s Nielsen-rated networks that aired the games are accounted for in the viewership calculation for all years. The Rose Bowl Game and Sugar Bowl were also carried on multiple Nielsen-rated networks, with each of those viewerships accounted for in the release.