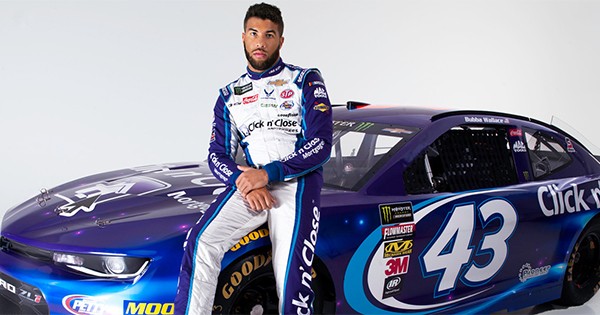 Nationwide — Bubba Wallace has once again made history after winning at the recent NASCAR’s top Cup Series, making him the 1st Black driver to take home the championship since 1963.

Wallace sped to victory despite the heavy rain that occurred during the YellaWood 500 at Talladega Superspeedway in Alabama. He was ahead for 5 of the 117 laps until the heavy rains caused the race to stop.
When the official announcement of the winner was made, Wallace can be seen celebrating excitedly with his 23XI Racing team, which is owned by Denny Hamlin and NBA superstar Michael Jordan.
“This is for all the kids out there that want to have an opportunity and whatever they want to achieve, and be the best at what they want to do,” Wallace tearfully said in an interview after the race, according to The Associated Press. “You’re going to go through a lot of (BS). But you always got to stick true to your path and not let the nonsense get to you.”
Wallace is the 2nd Black driver to win at NASCAR’s elite Cup level, next to Wendell Scott in 1963, wherein Scott wasn’t recognized as the winner for several months mainly because of the racist culture at that time. It was also only two months ago that NASCAR finally presented a trophy to Scott’s family.
Wallace’s recent win comes after a terrible year for him last year. In June 2020, a noose was discovered in the garage stall assigned to him. It happened a week after NASCAR had banned the use of the Confederate flag at its events since Wallace actively called it out.
These events, including his historic win, all happened in his native Alabama and he was grateful for it.
“When you say it like that, it obviously brings a lot of emotion, a lot of joy to my family, fans, my friends. It’s pretty cool,” he said.