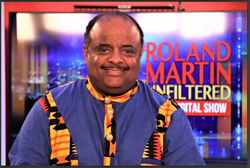 “The 2020 Election is one of the most consequential we’ve seen in American history, and Black voters will play a crucial role. Our goal at #RolandMartinUnfiltered is to provide unparalleled coverage of not only the presidential and U.S. Senate races, but the many local races that impact our people,”

The six-hour live stream and radio simulcast airs on Tuesday November 3, 2020 from 7 p.m. ET until 1 a.m. ET on #RolandMartinUnfiltered via FaceBook Live, YouTube, Periscope, and Black Information Network/IHeart Media. Providing real-time updates and analysis as the polls close and election tallies are reported nationwide on the historic race between President/Vice President incumbents Donald Trump/ Mike Pence and Democratic challengers Joseph Biden/Kamala Harris, Martin will be joined by special guests and noted experts during the broadcast, including activists, legal scholars, HBCU professors, political media pundits and more. Throughout the evening, Martin and his expert contributors will track and breakdown the results of important statewide and local elections around the country, then help provide key insights for Black America on the impact.

“The 2020 Election is one of the most consequential we’ve seen in American history, and Black voters will play a crucial role. Our goal at #RolandMartinUnfiltered is to provide unparalleled coverage of not only the presidential and U.S. Senate races, but the many local races that impact our people,” said Martin, who serves as Host and Managing Editor. “From top scholars to civil rights lawyers to health and economic experts and politically-minded celebrities, there will be no other place — digital, cable or broadcast — that will match the plans we have for our collaboration with IHeart Media and Black Information Network on election night.”

As Americans stream to the polls to have their say on who will serve as the next President, as well as choose their senators, representatives, governors, and a host of local officials, #RolandMartinUnfiltered will be there to provide coverage from every angle.

For more information on #RolandMartinUnfiltered or to subscribe, please visit https://www.youtube.com/user/rolandsmartin

Follow #RolandMartinUnfiltered on social media for updates and more!

#Roland MartinUnfiltered provides news and information from an unapologetically Black perspective five days a week. Celebrating its second anniversary, the show has carved its niche as a go-to source for interviews with key newsmakers and influencers. In depth discussion of topics across a variety of fields, including politics, education, health, entertainment, sports, African American issues and culture has been at the forefront of the #RMU mission since day one. When breaking news happens or big shifts in the culture occur, Martin has been there to document, explain and highlight those aspects of the story that most impact the African American community. Subscribe at https://www.youtube.com/user/rolandsmartin.

Over the course of a journalistic career that has seen him interview multiple U.S. presidents to the top athletes and entertainers in Hollywood, Roland S. Martin is a journalist who has always maintained a clear sense of his calling in this world. Martin is the host and managing editor of #RolandMartinUnfiltered and the author of three books: Listening to the Spirit Within: 50 Perspectives on Faith; Speak, Brother! A Black Man’s View of America; and The First: President Barack Obama’s Road to the White House as originally reported by Roland S. Martin. He has been named four times by Ebony Magazine as one of the 150 Most Influential African Americans in the United States and has been named several times to The Root 100, their annual list of influential African Americans.

In his career, Martin has been showered with more than 30 awards for journalistic excellence, including being named the Journalist of the Year in 2013 by the National Association of Black Journalists for his extensive focus on voter suppression and other issues of concern to African Americans during the 2012 election. He is a four-time NAACP Image Award winner, including named Best Host for two consecutive years.