Banksy lost a legal battle against a greeting card company that was using one of his images. The EU panel cited his anonymity as one of the reasons for the ruling, putting the artist’s copyright at risk. [The Guardian]

Two activist organizations, Worth Rises and Color of Change, have called for the removal of billionaire Tom Gores from the board of trustees of the Los Angeles County Museum of Art. [Los Angeles Magazine]

A planned London outpost for the Swedish photography venue Fotografiska has been scuttled, with its owners citing Covid-19 and Brexit. [The Art Newspaper] 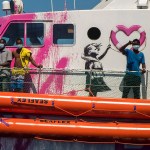 The Brooklyn Museum will sell 12 works from its permanent collection at Christie’s to raise capital for the maintenance of its collection. [ARTnews]

The activist group A Better Guggenheim published an open letter calling for the resignation of the museum’s three top officials. [The Art Newspaper]

Architect Frank Gehry talks about his designs for the new Dwight D. Eisenhower Memorial, which cost $150 million to build and be dedicated today.  [The Guardian]

Scholar Arlene Dávila talks about her new book, which looks at the invisibility of Latinx art and artists in the market. [ARTnews]

Tavares Strachan, “the artist whose medium is science,” gets the profile treatment. [T: The New York Times Style Magazine]

Artist Manuel Mathieu talks about donating the funds from selling a work to the Montreal Museum of Fine Arts back to the museum in order to start a fund to acquire more work by underrepresented artists. [NPR]

Leah Ollman writes about visiting four reopened art galleries in Los Angeles. She starts the piece, “Confession No. 1: I wasn’t eager to get back into the galleries.” [Los Angeles Times]