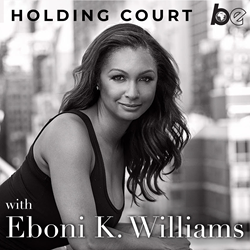 “There’s no way around it, the legal cases we hear about in the news are shaping social justice and popular culture. We need to dissect them from a Black perspective in a way that doesn’t hold back,” said Eboni K. Williams.

Attorney & TV host, Eboni K. Williams, will debut her new podcast ‘Holding Court with Eboni K. Williams’ on Wednesday, October 21, 2020. The podcast will join The Black Effect Podcast Network, a historic new partnership between iHeartMedia and Charlamagne Tha God dedicated to bringing the most influential and trusted voices in Black culture to the podcasting space. New episodes of ‘Holding Court with Eboni K. Williams’ will drop every Wednesday. Williams, who is currently Host & Executive producer of ‘REVOLT Black News’ on REVOLT TV, is known for her sharp analysis of legal and cultural headlines.

Williams, along with cultural observer Dustin Ross, will cross-examine news-making cases and famous faces providing teachable moments to navigate a rigged justice system. Each week on ‘Holding Court with Eboni K.Williams’, Williams and Ross will break down what’s on the docket in American justice and what’s not.

“There’s no way around it, the legal cases we hear about in the news are shaping social justice and popular culture. We need to dissect them from a Black perspective in a way that doesn’t hold back. Dustin and I will give you the facts straight and our takes will be highly unfiltered,” said Eboni K. Williams.

Williams holds a J.D. from Loyola University New Orleans College of Law. Ross is an actor, and head writer of late-night talk show ‘The Read’ on Fuse TV. The ‘Holding Court with Eboni K.Williams’ podcast, distributed through The Black Effect Podcast Network, will be available on iHeartRadio and all major podcast platforms.

Eboni K. Williams is currently the Host & Executive Producer of ‘REVOLT Black News’, which airs on REVOLT TV founded by Sean “Diddy” Combs. She’s also a co-host on REVOLT’s hip hop talk show ‘State of the Culture’ and a cast member on Bravo TV’s ‘Real Housewives of New York City’. Williams holds a B.A. in Communications and African-American Studies from the University of North Carolina at Chapel Hill, and a J.D. from Loyola University New Orleans College of Law. She began her professional experience in Louisiana in the wake of Hurricane Katrina. As a law student, Williams clerked for the Louisiana Secretary of State and the Louisiana Attorney General’s Office. She went on to specialize in family law and civil litigation, providing legal consult on high-profile divorce, spousal support, and child custody cases. Williams then transitioned into practicing as a public defender, as well as a private defense lawyer in North Carolina, and throughout the Greater Los Angeles area. She has represented clients in criminal matters including murders, rapes, high volume drug cases, sex crimes, and federal offenses. She also serves on the Board of Directors for Safe Horizon, which is the nation’s leading victims assistance organization. Williams’ podcast ‘Holding Court with Eboni K. Williams’ is produced by her production company Uppity Productions.

About The Black Effect Podcast Network