Jova Lynne Rejoins MOCAD as Senior Curator
After leaving the institution earlier this year, Jova Lynne has returned to the Museum of Contemporary Art Detroit as senior curator. Lynne first joined MOCAD in 2017, and was appointed senior curator in November 2019. She departed in spring 2020 amid protests against the leadership of executive director Elysia Borowy-Reeder, who was placed on administrative leave following accusations of “allegations of poor management and racial and gender bias (including harassment and bullying) from current and former employees.” (Borowy-Reeder was later terminated by the museum.) Lynne regained her responsibilities effective immediately and is currently planning an exhibition of Detroit artists slated to open February 2021. 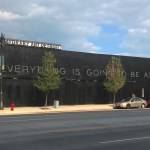 Mohamed Bourouissa Wins Annual Deutsche Börse Photography Foundation Prize
Artist Mohamed Bourouissa has won the 2020 Deutsche Börse Photography Foundation Prize, which comes with about $38,600. Bourouissa was nominated for his 2019 exhibition “Free Trade” at the Rencontres d’Arles, and his practice spans photography, film, drawing, and sculpture. Work by Bourouissa and the other artists shortlisted for the award—Anton Kusters, Mark Neville, and Clare Strand—will remain on view at the Photographers’ Gallery in London through September 20.

Outsider Art Fair Names New Director, Details Upcoming Edition in Paris
Nikki Iacovella, who most recently served as the managing director at Peter Freeman Inc. in New York, has been appointed director of the Outsider Art Fair, which holds exhibitions in New York and Paris. Iacovella has previously worked as a gallery and project manager for Art Basel and she has managed a Melbourne-based gallery specializing in Indigenous Australian art. The fair has also revealed that its eighth edition in Paris will be accessible online and in a curated exhibition organized by Alison M. Gingeras at the Hôtel Drouot.