The Los Angeles County Museum of Art has finally revealed updated interior views of its controversial new building after facing criticism for not making the renderings public. [ARTnews]

On Thursday, the planned opening date of the Whitney’s cancelled exhibition, “Collective Actions”, a group of artists selected for the show released an open letter asking the museum to “commit to a year of action — of mobilization and introspection.”  [The New York Times]

Lisson Gallery, Sadie Coles HQ and Stephen Friedman have announced that they will open temporarily in vacant exhibition spaces in London’s Mayfair district during Frieze Week. [The Art Newspaper] 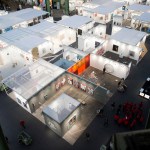 For the first time, Art Dubai will take place in multiple major art spaces across the UAE, including the Sharjah Art Foundation, the Jameel Arts Centre in Dubai and Warehouse421. [The National]

French galleries were fiercely divided over the fate of Fiac, Paris’ major contemporary art fair. The event was eventually scrapped, but the debate rages on. [The Art Newspaper]

Art Basel in Miami Beach, one of the most lucrative art events of the year, was cancelled. How is the local community and roster of blue-chip dealers handling the loss?  [Artnet News]

The first phase of the exhibition “Monuments Now” is now open at Socrates Sculpture Park in Queens. The show, which includes sculptures by Nona Faustine, Jeffrey Gibson, and Xaviera Simmons, considers the kind of future Americans can build if they confront the country’s sordid past. [The New York Times]

Writer Derica Shields examines Cameron Rowland’s current exhibition at the Institute for Contemporary Arts in London, which links the creation of Britain’s slave patrol with the modern-day policing of Black communities. [Frieze Magazine]