We Make America protestors with the signs they made for the 2019 Climate Strike.

In cities across the globe on Friday, people from all climes marched to speak out for climate justice in advance of a United Nations summit on the subject next week, with artists and others from the art world among the many in the ranks. In New York, Marianne Boesky Gallery, 47 Canal, Company Gallery, and others closed for the strike, and Momenta Art encouraged its employees to join. In London, employees at the National Theatre, Tate Modern, Tate Britain, and Southbank Centre protested. In Los Angeles, the Institute of Contemporary Art took the opportunity to announce it had met its fundraising goal for an initiative to become fully solar-powered.

One New York–based group of artists has been fighting for the cause for several years: a collective called We Make America. The group formed the day after Donald Trump won the 2016 U.S. Presidential election and has been organizing protests and demonstrations ever since. On Friday, artists including Elise Engler, Cookie Vazquez, Jim Long, Nancy Chunn, Judith Henry, Howard Saunders, and Linda Schrenk—all of whom are members of We Make America—gathered at Foley Square in Lower Manhattan to join the strike.

Last week, to prepare, some of the founding members of the group with more than 4,000 Facebook subscribers congregated at an open event (invitations are extended on Facebook) in Welz’s apartment to brainstorm ideas for what kind of signs they should make. On Friday, the vibrantly colored fruits of their labor went on display. One featured an image of an endangered white rhinoceros alongside text that read “Only one left!” Others took the form of tiger heads, snarling. Another described by one of the artists as like a drawing by Philip Guston showed human heads submerged in a flood. Yet another a was toothy cartoon version of Earth with fangs ready to bite. 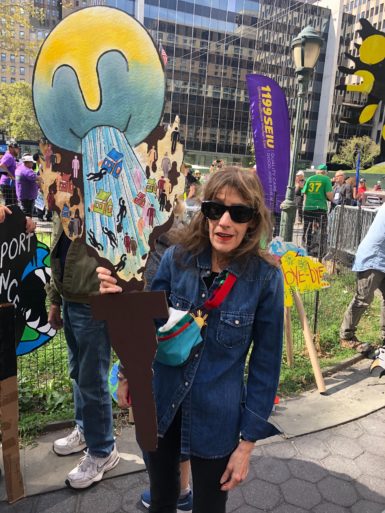 Nancy Chunn with a sign made with We Make America.

Joyce Kozloff, an artist associated with the Pattern & Decoration movement in the 1970s, told ARTnews that she intended her signs—wielded in protest of matters so severe—to be pleasing. “In my experience of carrying them in marches, bystanders and kids really enjoy them,” she said.

As Kozloff and her fellow artists walked by, teens snapped iPhone photos of the signs, and younger kids energetically pointed at the animal-shaped ones. “Those signs are lit! They’re almost like art,” a brace-faced protestor declared in passing, causing giggles from the group.

New York City public schools allowed their students to attend the strike, so many of the attendees were young. But veteran activists were on hand, too. “We’ve been doing this for a while,” Marina Urbach, an independent curator that works with We Make America, told ARTnews. “We were there in the 1960s, after all.”

Between chants (“What do we want? Climate justice! When do we want it? Now!”), the artists in We Make America chattered about the past demonstrations—such as the first Woman’s March in 2016, for which they made wire recreations of the Statue of Liberty’s torch, and another on Trump’s birthday, where they held up a papier-mâché puppet of Pinocchio. Their greatest work to date may still be a project called Kick Ass—a giant high-heeled shoe covered with stars and stripes that appeared to kick the inflatable rear end of a certain orange-hued politician—that debuted at last year’s Woman’s March and was largely led by Nancy Davidson.

Last week, in a planning meeting in advance of Friday’s strike, Davidson said she hoped to make fellow artists of protestors of all kinds. “Even if you’re not an artist when you walk in,” she said of new initiates to We Make America, “you’re one when you walk out.”