A protest at the Museum of Modern Art’s opening party on October 18, 2019.

With New York museums having become the subject of widespread protests recently, the newly reopened Museum of Modern Art is now in the crosshairs of activists and critics. A cause for celebration became an occasion for protest on Friday evening, as activists briefly interrupted a party at the museum intended to toast the results of MoMA’s $450 million expansion and renovation project.

The cause for their protest was a campaign being spearheaded by Art Space Sanctuary and New Sanctuary Coalition, two activist groups that have urged the museum to divest from financial services that have stakes in private prisons. The demands have largely been focused on Larry Fink, a trustee at the museum and an ARTnews Top 200 collector who owns BlackRock, a New York–based investment management company that is a stakeholder in the private prison corporations GEO Group and Core Civic. Activists have also alleged that MoMA uses Fidelity Investments, which owns stock in these private prison groups, to manage its pension fund.

In an email to ARTnews, a spokesperson for MoMA said, “The Museum of Modern Art does not invest in for-profit private prisons, and Fidelity does not manage our pension plan.” Asked to specify which company MoMA uses for its pension fund, the spokesperson said it is supported by an “investment committee.”

A spokesperson for BlackRock said in a statement to ARTnews that its funds “have democratized investing and broadened access to financial markets for millions of savers around the world.”

Over the past year, a number of protests have taken aim at major institutions, urging leadership to remove controversial trustees from their boards. The most prominent case of this occurred at the Whitney Museum earlier this year, when Decolonize This Place led a series of protests against the museum’s vice chair, Warren B. Kanders. After Kanders’s ownership of a defense manufacturing company that produces tear-gas canisters that have been used against protestors and migrants around the world, activists returned weekly to the museum, and Whitney Biennial participants demanded the removal of their works. In July, Kanders resigned.

But the campaign against MoMA is not about getting Fink to resign. Activists involved believe that lobbying the museum to kick Fink off the board would not solve the problems at hand. “For us, removing Fink from the board doesn’t get rid of mass incarceration,” Basma Eid, a program at Freedom to Thrive, an organization focused on immigrant safety that was one of the protest’s organizers, told ARTnews. “BlackRock is still going to be invested in Core Civic and GEO Group.” 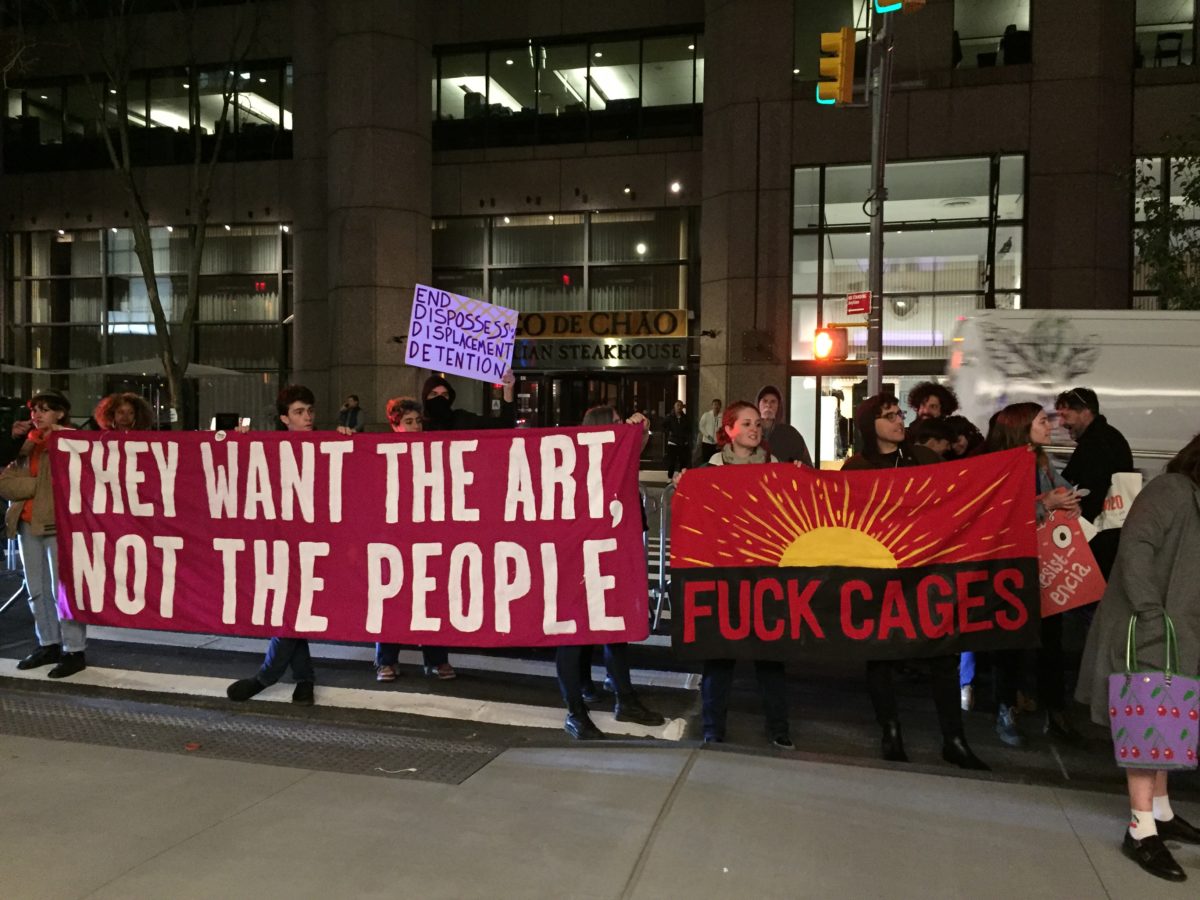 A protest at the Museum of Modern Art’s opening party on October 18, 2019.

Friday’s protest follows an open letter circulated last week by Art Space Sanctuary and New Sanctuary Coalition, in which the activists called on Fink and the museum to speak with artists, community leaders, and immigrant rights organizations about their alleged connections to mass incarceration. Artists including Tania Bruguera, Hito Steyerl, Andrea Fraser, and Mika Rottenberg signed the letter, as well as more than 220 others. In that letter, activists also demanded that MoMA and Fink take the funds currently invested in private prisons, and reinvest them in organizations that would put them toward combatting climate change and the imprisonment of members of communities along borders.

The action began as the first attendees to the MoMA party began entering the building. A group of around 150 amassed near the museum’s entrance, waving signs at those who were entering the museum. One protester set up two blocks of ice—one with the phrase “ABOLISH ICE” emblazoned on it, the other with the word “MoMA” etched into it—that slowly melted while protesters chanted phrases such as, “Hey, MoMA, what’s the odd aroma? Prison profits really stink! Fuck you, Larry Fink!”

Briefly, some activists brought the protest into the party, toting signs that read “MAKE SANCTUARY NOT PRISONS” and “MOMA DIVEST!” Beneath hanging Philippe Parreno sculptures, the activists held their banners up to party attendees, who milled around drinking champagne in the museum’s svelte and newly refurbished lobby. While all this was going on inside, many of the protestors remained outside, chanting and leading a teach-in as a line to enter snaked around the corner.

For Amin Husain, a member of Decolonize This Place, keeping Fink on the MoMA board while urging him to change his investments could potentially lead to more progress than demanding his resignation. “Removing Warren Kanders didn’t stop tear gas from being used, but the divestment opens up a pathway for the museum,” he said.

Fink is not the only member of MoMA’s board that is being protested right now, however. The Brooklyn-based advocacy group Center for Popular Democracy has announced plans to lead a protest on Monday, the day of MoMA’s public reopening, in which attendees will demand the removal of businessman and ARTnews Top 200 collector Steven Tananbaum from MoMA’s board. Tananbaum is the founder of GoldenTree Asset Management, a hedge fund that reportedly owns at least $2.5 billion in debt from Puerto Rico, which is currently undergoing a financial crisis. (A representative for Tananbaum declined to comment for this article.)

The goal of Friday’s protest, activists said, was ultimately about getting Fink to alter his investments. “It’s not just divestment—it’s divest and reinvest,” Nitasha Dhillon, another member of Decolonize This Place said, feeling hopeful that Fink could get in touch with the local community and come up with a newer, more socially engaged cause to support. She said that the Fink/MoMA campaign could be a way of reaching a broader public than Decolonize This Place’s previous activism at the Whitney. “With Kanders,” she said, “we were talking about decolonization, but people outside the movement didn’t really understand it. Divest-reinvest makes sense now.”